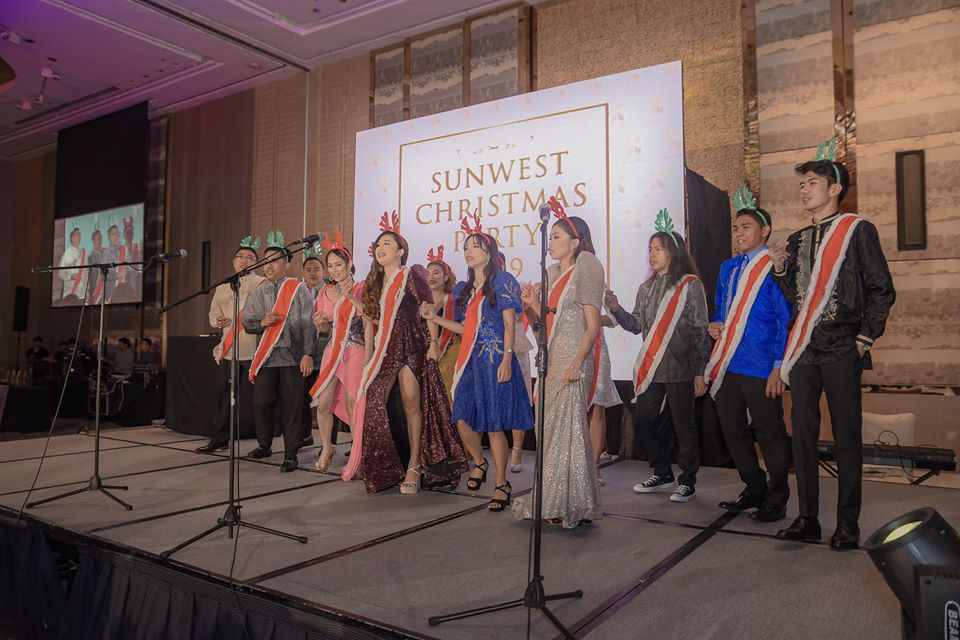 The Sunwest Group Holding Company, Inc. (SGHCI) held its year-end Christmas Party last December 9, 2019 at the Shangri-La at the Fort, Manila with the theme, “Modern Barong and Filipiniana”.

Employees arrived at the venue wearing their classic yet elegant Barong Tagalog and Filipiniana. The program started with a Mass, followed by the introduction from the emcees, Ms. Jillian Cuaki and Mr. Jerry Pongpong Jr. SUWECO President, Atty. Ronald “Bobby” S. Ang gave a heartwarming message to the employees and officially started the party.

The venue was filled with beautiful faces and sophisticated outfits of each employee. As if each attire was made by top stylists across the country. Everyone is excited to take pictures with each other, boasting how they look. It’s just a very elegant evening, but the party has just started and there’s more to come.

Since it’s the holiday season, a Chorale Competition was held and all the departments participated. Showcasing their talents and creativity, each group from different departments sang their hearts out to win the grand prize of Php 30,000.00. With their colorful costumes and props, eight groups sang some Christmas songs and many more.

Among the eight groups who battled, only 3 groups made it to the final. The 3rd placer who won Php 10,000 cash prize was from the Purchasing and Filing Department. Second place was from the Office of the Chairman of the Board (COB) and Chief Financial Officer (CFO) Department and received Php 20,000 cash prize. The 1st place was grabbed by the Human Resources (HR), Misibis, and Information Technology (IT) Departments and received the grand prize of Php 30,000 cash. The rest of the groups who didn’t make it received a consolation prize of Php 5,000 cash each.

Every year, SGHCI commends their outstanding employees who displayed extraordinary dedication and performance throughout the year. The following are the awardees:

Also, to show gratitude for our bosses who have supported the company unconditionally throughout the year, Sunwest employees surprised them with a beautiful painting of their family.

Another special award was also given to those who really put an “A” in the effort to their outfit and look. The face of the night was awarded to Ms. Camille Torralba of Purchasing Department. While the King and Queen of the night were received by Mr. Joel Tablingan of the Engineering Department and Ms. Chloe Ann Lanzado of Audit Department respectively.

As the evening went on, performances from different guests were also given for the employees to enjoy. First to perform to heat up the night was the Sunwest Band composed of employees from different departments, who performed some of the CEO’s favorite songs like Perfect by Ed Sheeran and Micheal Buble classics like Quando Quando and Sway. Vocals are Ms. Ruth Magalona from Human Resources and Mr. Lester Tapay from the Purchasing Department. Three employees from the Accounting Department also played in the Sunwest Band, Mr. Ephraim Arizo who played the bass, Mr. John Paul Legazpi on the rhythm, and Mr. Fermin Macatangay on the lead guitar. While Mr. Antonio Capinpin from the EAR Department played the drums.

A full-set band Yatz and Kevin Yadao were also invited to perform. Stand-up comedians Mokja and Star also performed their jokes and antics. Faith Cuneta performed her classic hits and before the night ended, Dj Steeze hit it up and let the party started. All the employees stood up to their feet and danced the night away.

It was a very fun and entertaining party for all the Sunwest employees. Surely, 2019 is full of struggle and hardship that’s why we all deserve to end the year in a nice note.